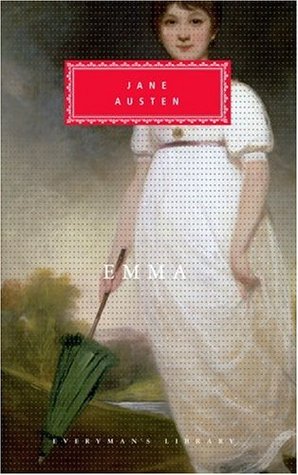 This week’s Top Ten Tuesday topic is Books that Would Be on Your Syllabus if You Taught [your subject of choice]101. I have Jane Austen on the brain because of Roof Beam Reader’s Austen in August event, so I thought I’d create a syllabus for that.  It’s a course I’d love to take myself — wouldn’t you? 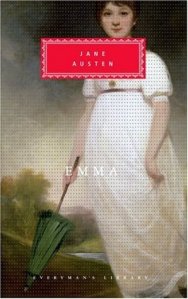 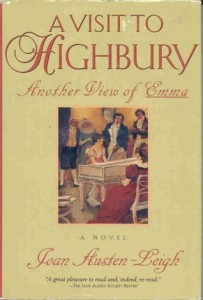 2015 is Emma’s 200th birthday, so what better time to read her story? I’ve paired it with a couple of retellings from the point of view of other characters (Mrs. Goddard in the former, and the eponymous Miss Fairfax in the latter), which should give rise to good discussions and perhaps some controversy over the secondary authors’ interpretation. 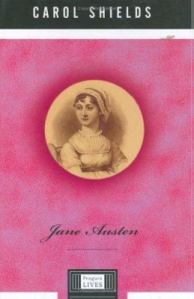 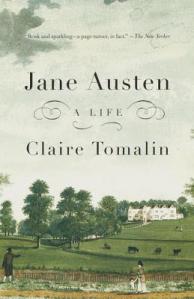 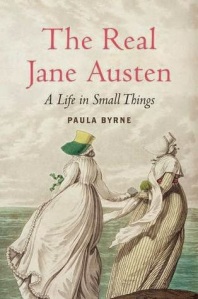 These three recent biographies are all excellent, and I would recommend tackling them in this order. First, Carol Shields’s pithy introduction from then Penguin Lives series; then Claire Tomalin’s more expansive account; finally, Paula Byrne’s riff on the theme, which is arranged topically rather than chronologically. 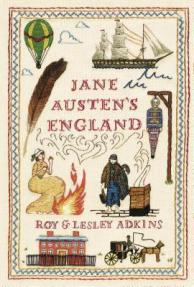 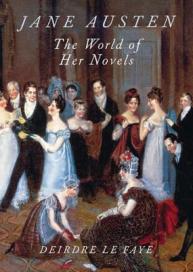 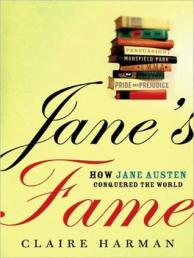 The Adkinses draw on primary sources to give us a unique perspective on the period, peeking into the lives of people from social classes both high and low. For a more visual approach, Deirdre Le Faye’s book can’t be beat as a gorgeously illustrated overview of Austen’s life and work. And Claire Harman takes us on a fascinating tour of the rise and fall and meteoric rise of Austen’s reputation as an author, with a number of surprises along the way.

Is Heathcliff a Murderer? and Who Betrays Elizabeth Bennet? by John Sutherland

Sutherland’s “literary puzzle” books are great fun, and these two include a question derived from Emma (Why are apple trees blossoming in June) which readers of that novel should enjoy pondering. Austen in August “students” are encouraged to come up with their own solutions — and further puzzles! 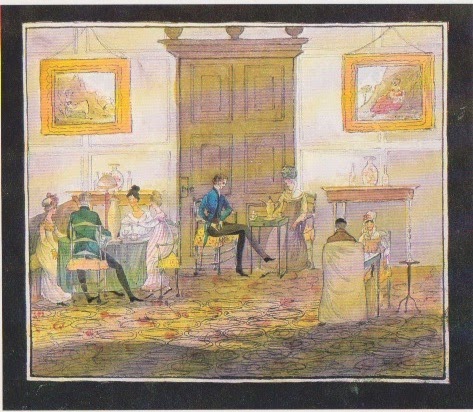 For my next (and possibly last) Austen in August contribution, I wanted to let readers know about a lovely book I chanced upon through this post at Charlotte’s Library: Mrs Hurst Dancing and Other Scenes from Regency Life, 1812-1823 (Victor Gollancz, 1981). This reproduction of two volumes of sketchbooks by a young lady of Jane Austen’s era provides an unusual glimpse into the daily life of an English country house of modest size.

The artist, Diana Sperling (about whom little is known, and who apparently abandoned art upon her marriage in 1834), has a delightfully unconventional and unstuffy approach to her sketches of family and friends. Slippery grass, recalcitrant donkeys, electrifying machines, lovelorn brothers, pesky flies that need to be “murdered” by maids standing on windowsills — these are just some of the subjects that inspired her, with charming results.

Diana’s artistic gifts are of the naive variety; her figures are not anatomically convincing, and she tends to make their faces very small and hide them behind large hats. But the liveliness and sheer fun of her compositions makes up for this. An introduction by Gordon Mingay gives the historical context, with brief notes opposite each picture (reproduced at their original size, and, as in the sketchbooks, on the right side of each spread).

We often read in nineteenth-century novels about young ladies industriously drawing and sketching. Here is a rare opportunity to see what a talented member of this legion of amateur artists produced, and to experience some of the forgotten details of their lives. Mrs Hurst Dancing is out of print, but used copies can be fairly inexpensive; check your library, too. For anyone interested in the era, it’s really worth seeking out. 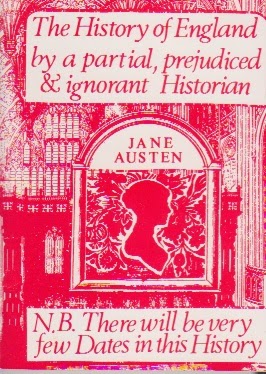 Jane Austen, The History of England

Someone gave me this little booklet years ago, but I’d never actually read it. I decided that Austen in August was the perfect occasion — I don’t have time to read lots of full-length novels at the moment, but a sixteen-page pamphlet is manageable. And I’m glad I finally cracked it open — it’s a delightful glimpse into Austen’s early creative work.

Dedicated to her beloved older sister Cassandra, who also provided the illustrations, this history is a comic parody of the ponderous tomes that were foisted upon the young in the eighteenth century. Consisting of a series of brief characterizations of the English monarchs from Henry IV to Elizabeth I, it reveals the author as a fanatical champion of the Stuart cause and of the executed Mary Queen of Scots. Pulling no punches, she describes herself from the outset as “a partial, prejudiced and ignorant historian,” thus slyly suggesting that perhaps some published historians should confess themselves the same.

Austen sometimes imitates the style of an unintelligent student’s essay, as she makes remarks like “Lord Cobham was burnt alive, but I forget what for,” and describes Lady Jane Grey as being “famous for reading Greek while other people were hunting.” Since their father ran a sort of informal boys’ boarding school in their home, the girls must have been very familiar with this sort of production.

At other times, Austen reveals flashes of the dry wit that would characterize her mature novels, as when she says of Henry VIII that “little can be said in his Vindication, but that his abolishing Religious Houses & leaving them to the ruinous depredations of Time has been of infinite use to the Landscape of England in general, which probably was a principal motive for his doing so.” Here we can distinctly hear the voice that she would later hone and refine, tempering the edge of her satire but keeping its brilliance.

As I learned from my recent reading of The Real Jane Austen: A Life in Small Things, this was one of the pieces that Austen copied into three vellum notebooks as a young girl (the History was written when she was just fifteen). Volume the Second, which contains the History of England and several other works, is now in the British Library, and through their virtual gallery you can view the original text here. It’s a priceless opportunity to be able to experience the energy and flow of the author’s handwriting, as well as the original colored drawings, though seeing the real thing would be even better.

In The Real Jane Austen, Paula Byrne points out that several of the portraits of the English monarchs are similar in appearance to Jane Austen’s relatives with the same names. Could it be, she suggests, that the heroine of the piece, the saintly Mary Queen of Scots, is a portrait of the author? It’s an intriguing idea, but even if we can never be sure what Jane Austen looked like, in The History of England we do have a clear window into the young author’s mind. 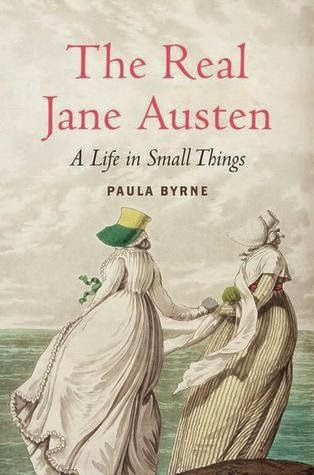 When we enter a preserved old house, objects are what we see. These paintings, cushions, scribbled notes, and scraps of lace are what are left to us as our link to the past. It can be a challenge to make the imaginative leap that brings the dead artifact to life, drawing out something of the living meaning it once had for the people who formerly handled and viewed it.

In The Real Jane Austen: A Life in Small Things Paula Byrne takes up this challenge, with admirable results. She does not seek to write yet another conventional biography of the elusive author, weaving together the available evidence (not very abundant) with biographical speculation to create a coherent cradle-to-grave narrative. Rather, she takes eighteen “small things” that formed part of Austen’s world, and uses them as the starting point for thematic essays that illuminate aspects of that world.

Though the essays take us on a very roughly chronological path, there are so many diversions along the way that it would be advisable to read a more traditional biography first, for orientation. With some dates under your belt, you are then free to range among the objects on display — an east Indian shawl, a vellum notebook — and explore how their history and significance connects with Austen’s life and work.

Byrne is concerned to dispel some of the myths that have grown up around the author, starting with the family-sanctioned biography by her nephew. In the place of the Victorian picture of a prudish, home-bound spinster scribbling away in a corner she gives us a theater-loving, relatively well-traveled woman who knew the facts of life and was aware of the political issues of the day. Byrne frequently departs from her main subject to discuss the people, places, and events that surrounded her. The result is a wide-ranging, eclectic, and always engaging picture not just of Jane Austen but of her whole social milieu at the turn of the nineteenth century.

While obviously it’s not the purpose of such a book to eschew anachronisms entirely, it is more pleasant if the language harmonizes with that of its subject. In general Byrne does fairly well, but there are some modern missteps, as when Jane’s naval brothers “didn’t make it” to their father’s funeral. Also jarring are the moments when Byrne leaps to conclusions for which there is really no concrete evidence: that Austen was afraid of childbirth, for example. She makes some confident pronouncements that evaporate on closer examination, as when she states of one of Austen’s favorite authors, Fanny Burney: “Without her, it would not have been possible for Jane Austen to reject the convention that a heroine must be beautiful.” Why on earth not? An attentive editor could have smoothed out some of these rough spots, so it’s a pity they remain.

If you can cope with these drawbacks, there is still much fascinating information here, presented in an entertaining and largely intellectually respectable way. Laying claim to “the real Jane Austen” is pretty ambitious, but by anchoring her book in real, tangible things, Byrne at least gives us a new angle on the author, her creative process, and the world she inhabited.