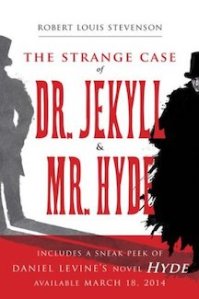 I’m not a horror fan, so I’ve never made an effort to read the classics of the genre — but for one reason or another, in the last few years I’ve read Frankenstein, Dracula, and now this brief but hugely influential tale of Dr Jekyll and Mr Hyde.

With all three of these books, it is hard to come at them with an unspoiled mind because the basic facts of the story are usually well known. In this case, the dual identity of Dr Jekyll can hardly be news to anyone. But the reading of these stories usually holds other surprises, as the author’s particular method of storytelling is not held sacred in retellings or dramatizations, perhaps for good reason.

Here, most of the novella is concerned with characters who observe Jekyll and Hyde but are unable to put the two together. However, since any suspense meant to be caused thereby is no longer effective, it’s with some impatience that we wait to hear from Jekyll himself — which comes only at the end, after the fact, as it were. The oddly distant, third-hand point of view is not the most obvious way of creating a tense and thrilling tale. But perhaps there was some hesitancy about approaching this subject that caused Stevenson to put it at arm’s length.

As with Victor Frankenstein’s creature and the undead Count Dracula, Stevenson has created an image of the Double, the dark shadowy figure that lurks in our unconscious and that plays out our inadmissible desires. While Frankenstein is haunted by the product of his overly intellectual thinking, and Dracula embodies the evil bloodlust of egoistic feeling, Jekyll shows the dangers of splitting off a part of the will. Wanting to be an outwardly good and upright person, but still to indulge the drives (never explicitly spelled out) of his worse nature, he “precipitates out” that part of himself into the horrible Hyde. But his ability to control the transformation is limited, and becomes more precarious until the final tragic outcome.

All three of these works are powerful and compelling expressions of a psychological problem that has great relevance for our time — the encounter with the evil that lurks in each one of us, an unsolved riddle which calls up fantastical images as we try to understand and master it. Each author has created something that transcends the work it came from and has taken on a life of its own. But it is still always interesting and worthwhile to go back to the origin and experience its particular qualities.

Stevenson wrote the book after a disturbing dream, and it can resonate with some of our own nightmare experiences. The spiral of addiction, of being unable to come to oneself while in the grip of some overmastering drive, is imaged in Jekyll’s downfall, for example. To this dilemma Stevenson offers no answer, no viable solution, except perhaps that as readers we can observe this sad fate and try to learn something from it ourselves.

It’s notable that it’s when Jekyll has renounced the draft that transforms him into Hyde because of its dangers, but yet is unable to resist indulging in the vices of his dark side, that he starts transforming uncontrollably and unpredictably. How do we truly become masters of ourselves and all our parts and possibilities? Why are evil habits and compulsions so strong, even for fundamentally good people? The tale feels unfinished, and raises many questions. But it’s up to us try to answer them.

Back to the Classics: Name in the Title

12 thoughts on “Back to the Classics: Dr Jekyll and Mr Hyde”