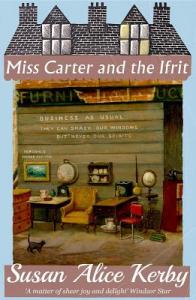 One of the latest of the ongoing series of Furrowed Middlebrow books from Dean Street press, Miss Carter and the Ifrit is a grown-up fairy tale that reminded me of the works of E. Nesbit (another FM author with The Lark). As so often with Nesbit, it’s a story of how mundane life is touched by magic with amusing and sometimes inconvenient results, ultimately helping to expand our understanding of ourselves and our world.

Miss Carter is a middle-aged spinster working in the censorship office during the Second World War who finds her life turned upside down when she inadvertently releases an Ifrit (don’t call him a genie!) The spirit of Arab legend, doomed to imprisonment and servitude until he should atone for his evil deeds, finds himself out of place in the new world of rationing and blackouts.

Joe (as he is dubbed by Miss Carter, an admirer of Stalin — who was then a “good guy” to the Brits) longs to serve his benefactor, but her spinsterish scruples get in the way. These gradually start to come down, though, and she surprises herself with some of the desires and wishes she finally has to admit she has.

You can probably imagine some of the funny scenes and situations that ensue, as Miss Carter has to hide Joe from her friends and neighbors and quell his tendency to shower her with extravagant gifts. They develop a rather sweet relationship and the ending is touching — more so than the rather perfunctory romance, I thought.

The wartime setting provides further complications and questions — why doesn’t Miss Carter just send Joe to take out Hitler, for example? Turns out he is forbidden to harm any humans, though he can and does spy on him for a time, leading to some intriguing discoveries. This thread was dropped somewhat abruptly and could have been developed further, but maybe it would have been too weighty for such a slight and lighthearted tale.

Slight it may be, but there are some thoughtful nuggets to chew on as well, such as the reflection that we now have so many powers that our ancient forebears could only conceive of as “magical” … and what have we done with them? Wished away our inheritance, it seems. That at least has not changed since the 1940s.

So if you’re in need of something to lighten the winter darkness, Miss Carter and Joe will entertain you but also make you think. And maybe make you wish you had an ifrit to cook your breakfast every morning.

8 thoughts on “New Reprint Review: Miss Carter and the Ifrit”