Readers of Robertson Davies’s fiction — to which we were given a brilliant introduction yesterday in Chris’s review of The Deptford Trilogy — may become curious about the motivation and inspiration behind his multifaceted talent. Fortunately, there is a good deal of material to feed this curiosity, as Davies wrote and spoke extensively about various fields of interest throughout his overlapping careers as a journalist, an actor and playwright, an educator, and a writer of fiction.

Shortly after his death in 1995 two collections appeared that gathered some of this material, much of it delivered as lectures and previously unpublished, and these are a wonderful place to encounter his unique voice — whether or not you’ve already found it through his fiction. He generally speaks from a personal and idiosyncratic point of view, revealing much about his own tastes, opinions, and development, even as he opens windows into fascinating, often overlooked aspects of life, history, and literature.

Wise, surprising, funny, enlightening, sometimes cranky or cantakerous, not always to be agreed with or swallowed whole, but always lively and thought-provoking, these pieces give the impression of a mind endlessly enchanted with the richness and strangeness of life, and inviting us to dive into the depths. It’s this perspective for which I so value his writing, finding it a bracing antidote to the mix of utilitarianism and frivolity that seems to characterize our age.

This is the Magian World View, as described at the end of the novel World of Wonders — “a sense of the unfathomable wonder of the invisible world that existed side by side with a hard recognition of the roughness and cruelty and day-to-day demands of the tangible world … It was poetry and wonder which might reveal themselves in the dunghill, and it was an understanding of the dunghill that lurks in poetry and wonder. ”

In all of his work, I believe, Davies was calling us to bring back into our lives this unfashionable, challenging, yet deeply necessary and rewarding mode of meeting the world. And as a lifelong champion of the arts of the written, spoken, sung, and dramatized word, he knew from the inside out how a true engagement with those arts can enliven and redeem our pallid, worn-out modern souls. 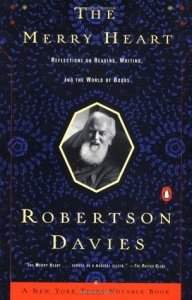 That’s the overall subject of these two volumes: The Merry Heart with a focus on “Reflections on Reading, Writing, and the World of Books,” and Happy Alchemy on “The Pleasures of Music and the Theatre.” From the first piece, “A Rake at Reading,” to the last, “How To Be a Collector,” he champions the importance of what in another context he named the clerisy, the unofficial body of intelligent people for whom reading is a passion, but not a profession. In typically un-stuffy style, he gives homage to Dickens, Proust, and Balzac, but also considers the merits of the funny papers and the Ontario Primer; he appreciates Victorian melodrama along with Shakespeare and Shaw.

As well as lectures, essays, and autobiographical sketches, the contents include spoofs, parodies, and pastiche, in various forms ranging from verse to ghost story to film scenario. In the introductions, excerpts from his diaries shed light on the circumstances surrounding each piece’s composition, and his Theatre Diary is mined for opinions on various relevant productions. It’s a joyfully eclectic gathering that seeks always to point out the delight and inspiration to be found in the word-arts, and can be happily wandered through for many hours by those of us who share this predilection.

There are interesting glimpses into the process behind Davies’s own writing; he describes the genesis and pervading themes of some of his novels, and tries — when asked by a discerning audience — to give a sense of how intuition and consciousness come together to form a work of art, in a way that can surprise and delight the author as much as anyone. When confronted by boorish or unintelligent questioners, he responds with less patience; to the eternal question “Where do you get your ideas?” he likes to answer “I don’t — they get me.”

In similarly curmudgeonly fashion, he deplores the proliferation of people who want to write and gain money and fame thereby, but don’t want to pay the price in daily toil; he is dismissive of the vague blather in modern education about everyone being creative, and questions the quality of “engagé” writing that “emerges when a writer seizes upon a theme because it is for some reason popular, rather than because he has any strong initial feeling about it.” Davies is broad-minded in many ways, but he also has personal standards that may be called elitist. He doesn’t care, taking the view that an overly democratic approach to all areas of life, and to the arts in particular, will result in levelling everything to a sort of gray paste of mediocrity. 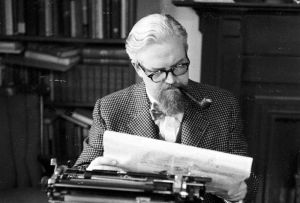 He could well be right. So against this numbing, dehumanizing tendency, he challenges us to read, write, and think out of our own individuality, which is yet rooted in the universal reality of our human nature. He calls us to look to the future without forgetting the lessons of the past, which he insists have not lost their relevance, however modern and liberated we like to think we are.

One of his favorite quotations, which he repeats in various contexts, comes from Vladimir Nabokov, who spoke of the shamanstvo of the novelist, his “enchanter quality.” The enchantment of Davies’s fiction is not at all deflated by these “behind the scenes” collections, but rather enriched and enhanced by them. I encourage you to give them a look, with confidence that you will discover literary magic of another sort.

17 thoughts on “The Merry Heart and Happy Alchemy”