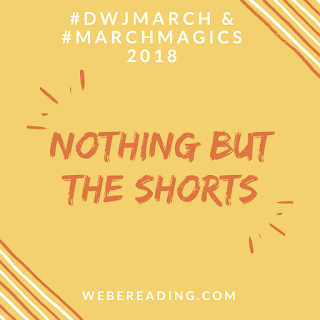 It’s the magical month of March — time to celebrate two favorite fantasy authors, Diana Wynne Jones and Terry Pratchett, thanks to Kristen of We Be Reading who hosts March Magics each year. It’s a free-form event this time — read and post whatever and whenever you like, but be sure to visit Kristen’s blog to see what she’s up to, and connect with other fans.

This year, the selected theme is “Nothing but the shorts,” focusing on the dozens of short stories penned between the two authors. Because of my current book acquisition ban, I’m limited to the books I have on hand — and I have no stories by Terry Pratchett, and only a few by Diana Wynne Jones. So I decided to reread my copy of Everard’s Ride, a book I cherish not so much because it’s a rather valuable signed limited edition, as because it’s proof that an underrated master was finally getting some well-deserved recognition with this special production (done for the 1995 Boskone conference at which she was guest of honor).

But I also cherish it because it has one story that for some reason was never republished anywhere else, in the many confusingly overlapping compilations and anthologies of DWJ stories. And within this story is a poem I love, one of the few poems I’ve seen by her — though surely she must have written some for her own pleasure, if nothing else. At almost 100 pages, “The True State of Affairs” is more of a novella than a story, perhaps a discarded early draft for a novel. It feels unfinished, at any rate, frustratingly fragmentary — no explanation is given for the protagonist apparently being transported from modern England to a place bearing some resemblance to the universe of the Dalemark series — and tantalizingly lacking in closure.

I love it, though, because it’s a story about the risky business of expressing and defining and discovering ourselves through language. It’s written by a prisoner on scraps begged from her jailer, a prisoner who doesn’t understand the circumstances of her imprisonment, but who has to try to comprehend her predicament, remember who she is, and keep herself from going mad. In other words, it’s about life. What is the true state of affairs, for any of us?

Truth is the fire that fetches thunder
Kindled of itself, and only mine
In the heart that had its fashioning.

Looking out from her confinement, she sees another captive, and weaves stories about him that may or may not be true. From this she enters into a clandestine correspondence that leads her into further danger, emotional as well as physical. Who can say what really lives inside another person? What is truth — in our perceptions, in our ideas?

In this strange, ambiguous tale, with its uncharacteristically bleak ending, Diana Wynne Jones captures something of the mystery of self and other, without reaching any easy or comfortable conclusions. As with all of her work, she reminds me that each one of us human beings is a story in the process of being told, and makes me want to listen.

What do you plan to read this month? What are your favorite stories by these authors?

17 thoughts on “March Magics: The True State of Affairs”