East of Eden is one of those books that I’ve seen mentioned by many readers as an all-time favorite (though there are a few haters as well). When the Folio Society did a poll to gather suggestions for publication, it was at the top of the list … and they duly published their beautiful edition this year. Somehow I had never gotten around to reading it earlier in my life, but now seemed to be the perfect time.

And so it proved to be. In this time of chaos and confusion, Steinbeck’s exploration of the mystery of evil and the transforming nature of love is rich, complex, and powerful. It’s also simply a compelling story, which one can enjoy without thinking much about the deeper layers. But even if these do not come fully to consciousness, they will reverberate in the soul and have their own transforming effect.

Steinbeck weaves together many elements into this tapestry: a snapshot of a particular time and place, the Salinas Valley in California at the turn of the century; people and tales from his own family history; images and themes taken from myth and religion; invented characters including a terrifying psychopath; and commentary directly expressing the author’s philosophy. It’s a big, ambitious novel, and though there are weak points and a certain loss of narrative energy toward the end, for me Steinbeck succeeded in his stated goal of making me feel as though I were not reading a book, but living it. The people and places he created will continue to live within me and play their part in the drama of my own life. What greater claim to immortality could an author have? 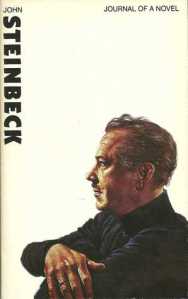 A fascinating companion book is Journal of a Novel: The East of Eden Letters. As he was writing, Steinbeck simultaneously wrote a journal in the form of unsent “letters” to his editor and friend, Pascal Covici, on facing pages of the manuscript. It’s an unusual and perhaps unique glimpse into the writing process, into the usually invisible realm where an artist struggles to grasp and give form to what wants to be expressed through him. In many ways this struggle remains obscure — Steinbeck often tells Covici that he’s trying to do something without saying clearly what it is — and there are also passages that are repetitive and dull, such as recurring musings about pencils and pencil sharpeners. But even this is interesting in what it reveals about how the mundane and the extraordinary combine in a writer’s mind, and how he negotiates that balance in the heat of creation.

A few times, Steinbeck states in the letters that the creation of a novel is everything to him; once it’s finished it’s like a dead thing, and it’s time for him to move on to the next. This seems to me to express so well the sacrificial role of an artist, who gives all his mind and heart and soul to the process of creation, shaping a work that represents both something universal and something of its creator’s unique perspective, and then must leave it free to have its own life — which it does, within us.

And it’s clear to me from certain passages that Steinbeck and I are “kindred spirits,” as Anne Shirley would say. Here for example is his response to the contemporary trend towards pessimistic and misanthropic writing, which many would still consider the only serious kind:

If the written word has contributed anything at all to our developing species and our half developed culture, it is this: Great writing has been a staff to lean on, a mother to consult, a wisdom to pick up stumbling folly, a strength in weakness and a courage to support sick cowardice. And how any negative or despairing approach can pretend to be literature I do not know. It is true that we are weak and sick and ugly and quarrelsome but if that is all we ever were, we would millenniums ago have disappeared from the face of the earth… — Journal of a Novel, p. 107

His credo is amply demonstrated in East of Eden, which unflinchingly portrays the depths of evil and misery to which mankind can descend, without ever losing hope in our ascent. This is the kind of book it always gives me joy to discover, and that indeed gives me strength to carry on living. I truly don’t know what I would do without these beacons on the way.