Ever since Betsy Bird put this long-lost Newbery honor book from 1934 at the top of her list of underrated middle grade books I’ve been dying to read it. And lo and behold, sometimes dreams do come true! Three years later, it’s back in print thanks to the fantastic folks at Paul Dry Books, with an afterword by Betsy herself.

Set in ancient Crete, The Winged Girl of Knossos starts out with a thrilling scene in which our heroine, Inas, goes deep sea diving for sponges — just for the fun of it, not because she needs the work — and the action doesn’t let up from there. She also takes a dramatic turn in the bull ring, helps out her friend Princess Ariadne who has inexplicably fallen for one of the boorish Greek captives, and comes to the rescue of her father Daedalus who is causing a stir with his outlandish inventions (including hang-glider-style wings that permit humans to soar with the birds). Danger abounds, but so do moments of beauty, artistry, and lyricism. 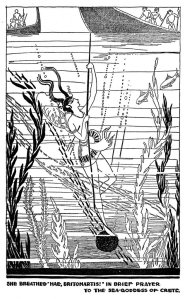 Having just done a reread of Mary Renault’s Theseus books it was interesting to revisit the mythical Crete and Knossos from another point of view. The discoveries at Knossos were quite new when the book was written, and Berry clearly enjoyed coming up with ways to put the fragments together into a cohesive and compelling narrative. She crams in more incidents, characters, and details than would probably fit in a soberly factual story, but her storytelling verve might well inspire young students to learn more about the truth behind the tale. And in the wonderfully energetic Inas, she’s created a heroine for the ages, one of the first and most memorable self-determining girls in the Newbery canon.

As an adult reader, I found myself sometimes missing a more introspective side to Inas’s adventures, and more character development than action, but at the target age range of around 9 to 12 I probably would not have sensed anything lacking. I think I would have been enchanted with this vision of a magical time and place, and would have simply loved flying, diving, sailing, adventuring, and intriguing with Inas.

Erick Berry was a pseudonym of Allena Champlin Best, who trained as an artist and illustrated most of her own books as well as those by her husband, Herbert Best. For this book, as well as several dramatic full-page illustrations, she created charming decorations drawn from Minoan artwork, all of which greatly enhance the text. The Paul Dry edition preserves these, while re-setting the text in an elegant and appropriate style. Overall, this is a rediscovery that no fan of children’s historical fiction, myth-inspired adventure stories, or Newbery-award books should miss.

8 thoughts on “New Reprint Review: The Winged Girl of Knossos”