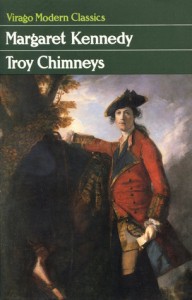 I’ve just finished Troy Chimneys, and already I want to read it again. This is partly to try to puzzle out the chronology, which is confused by a complicated multi-layer structure of diaries and letters bandied back and forth between various generations of different families — but it’s also because the story at the heart of this maze was worth the effort to dig through to it, a touching portrait of one man’s moral struggles.

To add a further complication, this man, Miles Lufton, born to an English clergyman’s family in 1782, thinks of himself as two men: Miles, the part of himself that would be happy to live in Wiltshire and “listen to the nightingale,” and Pronto, the social-climbing MP whose only goal in life is to enrich himself. The title refers to a house that Miles buys with Pronto’s gains with the idea that it can become a retreat for his better self, but this does not turn out as he had expected or hoped, as with so much else in his life. As he writes his memoirs he reflects on how the split in his being arose and how it may be bridged — perhaps by the evolution of a “third man,” one who can witness and transcend the limitations of both Miles and Pronto.

Miles’s life journey is framed by two love stories, one that takes place in his ignorant youth and one that arises as he approaches middle age. Here Kennedy is working with much the same material that occupied Georgette Heyer in her Regency romances, but gives it a more melancholy, reflective spin than those lighthearted concoctions do. Miles is always failing himself and others, and yet I don’t see him as a failure. His struggles resonate with our own, his quest for self-integration is both highly modern and one of the most ancient, archetypal human experiences. The ending is not a conventionally happy one, and yet it is somehow not depressing. By gaining self-knowledge, Miles has also gained a measure of freedom, and so his suffering is not felt to be in vain.

Kennedy’s evocation of the late eighteenth and early nineteenth centuries (with some Victorian interludes) is lightly and expertly done. She crafts her language carefully to locate us in the period without sounding archaic. She has no need to throw about Regency slang or refer to details of fashion or etiquette; her characters simply exist in the time that belongs to them, without undue fuss and bother. To appreciate how she does this is yet another reason for rereading.

These are just a few of the thoughts that arose as I read this complex, playful, insightful and challenging novel. I don’t want to give away too many details, because part of the fun of reading is to discover them for yourself. If you venture to do so, be sure to plough through the framing letters at the beginning, which can be rather tough going, and get into Miles’s first Journal. I hope you will be quickly drawn into his story, as I was, and not want to leave.

Back to the Classics – Romance Classic
Classics Club list #53