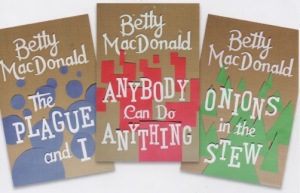 Since reading the biography Looking for Betty MacDonald, I’ve been eager to read MacDonald’s lesser-known autobiographical works. And with the new editions from the University of Washington Press, now I can!

Originally published within the short dozen years between the smash success of her first book, The Egg and I (1945), and her sadly early death from cancer, these three books form a fascinating window onto the past of the Pacific Northwest, and still have the power to entertain and amuse us today.

The Plague and I was first to be published, in 1948, and its title was an obvious attempt to reproduce the success of the earlier book. But it’s not a direct chronological sequel — several years had gone by since Betty left her “Egg” husband and their chicken farm in the Olympic mountains, and returned with two young daughters to her mother and siblings in Seattle. These years are chronicled in Anybody Can Do Anything (see below), but as her biography reveals, Plague is based on a diary Betty kept during her subsequent time in a tuberculosis sanatorium. Thus she had a head start on it when a second book was demanded by publishers and public.

It’s certainly an unlikely subject for a humorous memoir, and I spent much of the reading feeling less amused than astonished and humbled by what many people had to go through in the days when the “white plague” was a real menace. There was no way to battle the disease except to give the lungs complete rest so that they would form barriers around the parts invaded by bacteria. Surgical procedures involved collapsing the lungs so they would be immobile (it is still an open question to me how the patients were able to breathe after this). In Betty’s sanatorium, patients were forbidden to talk, to cough, to laugh, even to read and write until they had begun to recover, and nurses enforced the rules with semi-sadistic military discipline. 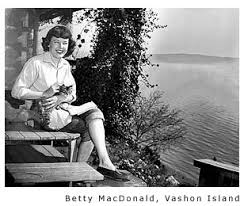 Can you imagine writing a whole book about being forbidden to do anything other than lie in bed? But Betty does, and she somehow makes it a riveting chronicle. She’s helped by the presence of some memorable characters, including her Japanese roommate “Kimi,” one of the smartest and funniest invalids you could hope to have in the next bed. (Though Betty betrayed her unfortunate prejudice against Native Americans in The Egg and I, she shows more liberal views in this book — she’s placed in rooms with both Kimi and an African American woman because nobody else was willing to get that close to them.) Brave, foolish, rebellious, sly, charming, defeated, defiant — in the intense environment of the sanatorium, many different sides of human nature come to light. It’s not unlike a war chronicle, and like survivors of a war, Betty and her friends feel they are now members of a “club” that no one else can truly understand.

Humor, here, is not a matter of mere silliness or belly laughs, but a way of standing apart from overwhelming experiences, not letting them get the better of you. That ability also serves Betty well when she comes to record how her family survived the Depression in Anybody Can Do Anything (1950). Her older sister Mary is determined that Betty can do anything that she (Mary, that is) sets her mind to, and so she struggles through a series of odd and unsuitable jobs, from hand-coloring photographs to selling direct mail advertising to assisting a gangster. In the midst of these episodic reminiscences, the constant is the presence of Betty’s warm, loving, if somewhat eccentric family, who keep things lively:

In addition to good health, my family possessed a great capacity for happiness. We managed to be happy eating Grammy’s dreadful food or Mother’s delicious cooking; in spite of cold baths and health programs; with Gammy’s awful forebodings about the future hanging over our heads; in private schools or public; in large or medium-sized houses; with dull bores or bright friends; with or without money; keeping warm by burning books (chiefly large thick collections of sermons, left to us by some of the many defunct religious members of the family) or anthracite coal in the furnace; in love or just thrown over; in or out of employment; being good sports or cheats; fat or thin; young or old; in the city or in the country; with or without lights; with or without husbands.

Her final work, Onions in the Stew (1955), covers a more stable time in Betty’s life, the twelve-year period when she had remarried and moved to Vashon Island with her new husband and two teenage daughters. Each of her books vividly evokes a place where she lived, and this one’s location is particularly dramatic. Beautiful and a bit remote, with no road to their house and an adventurous commute to Seattle by ferryboat, it’s a marvelous but challenging place. The pieces in this book are more loosely connected than in the others, with the common thread being “life as usual in a very unusual setting.” They could have been published as articles in a women’s magazine, but thankfully Betty’s tart sense of humor saves them from being a run-of-the-mill chronicle of 1950s domesticity — in fact, one of the pieces is a sharp critique of the ridiculous food advocated by women’s magazines of the era.

The Vashon house is still standing and is known as the Betty MacDonald Farm; the current owners run it as a B & B, with a loft room or cottage available by the night. I’ll be longing to visit on my next trip to Seattle, and if you read all of Betty’s reminiscences, I’m sure you will be too. But even if you can’t get there in person, you can get a glimpse into her world through these wonderful books.

13 thoughts on “Three by Betty MacDonald”