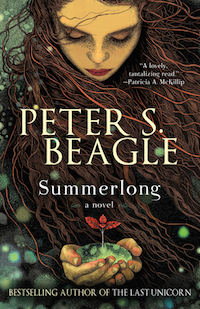 The Puget Sound setting and mythological overtones of Peter S. Beagle’s new novel, Summerlong, made it sound irresistible to me — and it turned out to be a lovely end-of-summer read. A long-term unmarried couple, one living in Seattle and the other across the water on Gardner Island, find their lives transformed in unexpected  ways when they meet an enchanting but mysterious young waitress. Where does she come from, and what is she fleeing? Why does she have such a magical effect on everyone around her? As her secrets are slowly revealed, we find that nothing can ever be quite the same again.

I really appreciated how Beagle treated the theme of mature love and relationships, a subject not often approached in fantasy fiction these days. He’s brave enough to acknowledge that some hurts cannot easily be healed, that endings in life are often not as tidy as turning the last page of a book. I liked seeing the characters constantly evolve, as old routines die away and new capacities come to light — being retirement age doesn’t mean losing one’s capacity to learn and grow, after all.

I did find that I enjoyed the build-up of the story, characters, and the setting — which is very vividly and accurately evoked — more than the denouement. To me the mythological aspects were more effective when hinted at than when overtly referenced. Still, the world and people of Summerlong will linger in my memory for more than a season, leaving traces of beauty, wisdom, and heartache behind.