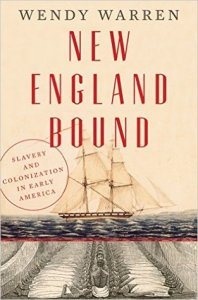 New England likes to position itself as the cradle of liberty, home of many of the figures behind American independence from Britain, as well as a land of freedom in opposition to the slave-owning South. But in this new study by historian Wendy Warren, we are given a very different view of the early days of the New England colonies, during which the bondage of African and Native American slaves formed an essential part of the economy and indeed of the identity of the region.

The evidence is scant and scattered, but Warren has painstakingly gone over probate records, lawsuits, sermons and other documents and assembled a picture of a land and people  “bound” up with the institution of slavery in multiple ways. Though the proportion of chattel slaves in seventeenth-century New England was relatively low, with their numbers and mode of employment never so dramatic as on the large plantations of the South, they were widely used as household labor and fully accepted even by the most piously Puritan of colonists. The extent of colonial involvement in the slave trade, however, is greatly magnified when one considers that New England was part of a wider Atlantic mercantile system for the English, supplying the West Indian sugar plantations and thus endorsing and enabling that most horrifically deadly form of slave labor.

It depended on that system, too, as the northern land was too poor to produce a cash crop out of itself. By sending goods and foodstuffs (often substandard or rotten items deemed adequate for slaves) to the rich planters who gained more profit by devoting all their time and land to growing sugar, members of the dominant merchant class of New England gained an essential market. They also began to feel their power as a key player in the English trading triangle, which may been the germ of the drive for independence.

The colonial impulse also required “unplanting and replanting” the native people who already inhabited the land the settlers wanted for their own needs. Some were forced into local servitude, but many others, too unruly for that purpose, were transported to serve elsewhere even as Africans were imported in the other direction. In one telling incident, a group of native Americans captured in King Philip’s War were sent abroad, except for an old man too decrepit to work. After some debate, his captors showed him mercy — by decapitating him rather than having him torn apart by dogs.

That is just one of the cruel stories that Warren has unearthed for us, illuminating a strange irony. Without intimate knowledge of the miserable state of slavery, without day-to-day intercourse with people treated as property and denied a will of their own, would the New England states have waved the banner of freedom so forcibly? The bloodstained origins of our vaunted rights and freedoms must not be overlooked, if we are to move forward into a truer form of justice.

According to the jacket publicity this book has been hailed by other historians as an important new contribution to the topic, and though I’m by no means an expert I see no reason to argue with them. The writing was sometimes a bit stiff and repetitive, perhaps showing its origins as a dissertation. But the arguments and the research backing them up are compelling, disturbing, and enlightening. Certainly, I’ll no longer be able to walk the Freedom Trail or sing songs of liberation without remembering the chains that our nation forged in its earliest days, and that are in many ways still binding us today.