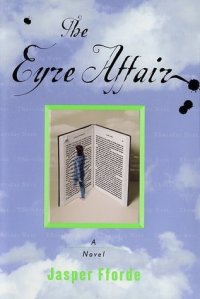 When The Eyre Affair first came out, I was doubtful. It sounded like an overly cutesy idea to me: in an alternate universe, agent Thursday Next (ugh, that name!) is after criminal mastermind Acheron Hades (ugh, again) who’s figured out how to enter books and capture fictional characters, such as Jane Eyre. Can Thursday save the world from this dastardly plot, and find her own happiness in the process?

This didn’t sound appealing at all, so I passed on it and all the wildly popular sequels that Mr. Fforde — if that really is his name — has concocted since. But with Girl with Her Head in a Book’s Brooding about the Brontes event coming up, I became curious again about this book that dared to play havoc with the characters and plot of one of my favorite works of fiction. Susie had liked it a lot, so it seemed worth giving the old 50-page try at least. (If I can’t get into a book after 50 pages, I feel justified to stop reading.)

Well, The Eyre Affair passed the 50-page test, and in fact I ended up enjoying it very much. Yes, there are those stupid names — in addition to Thursday and Acheron, we’re subjected to Braxton Hicks, Runcible Spoon, and — oh, please! — Jack Schitt. Even Warner Brothers cartoons were a bit more subtle in this department, I feel. There are also awkward point-of-view shifts and some other infelicities that a good editor could have helped this first-time novelist to avoid.

But the sheer exuberance of the book’s imaginative world won me over: an alternate reality where the fashion for cloning extinct species has resulted in a surplus supply of Dodos, nuclear weapons have never been invented but the Crimean War has been dragging on for 130 years, and Wales rejoices in its status as a separate country. It could have been too whimsical for words, but somehow it managed to hold the balance between sublime and ridiculous well enough to keep me reading, and smiling too.

The most fantastic thing (in several senses) about this fantasy world is that people care about literature, art, and culture as matters of life and death. Instead of sports heroes on their trading cards, kids covet Henry Fielding characters (“I’ll trade you my Sophia for your Amelia”). Surrealist artists who want the right to melt clocks and Raphaelites upholding the banner of realism battle in the streets. A Rocky Horror-style version of Richard III is performed every week at a Swindon theater, taking all its actors from the raucous audience who have participated in it countless times. And of course, there’s the little matter of a device being invented that lets us enter into the world of a favorite book, interact with the characters, and maybe even alter that ending that has always been so unsatisfying…for us bookworms, it’s the ultimate in wish fulfillment, and Fforde makes our dreams come true.

Though I think that some of the jokes will be best appreciated by English majors and others who know their Sophias from their Amelias, there’s plenty here to raise a chuckle from all kinds of readers. (Just make sure that you either have already read Jane Eyre, or don’t mind having the entire plot revealed beforehand, because otherwise the experience will be seriously spoiled for you.) The world itself is the main attraction; none of the characters is well-rounded enough to hold our interest independently, and even Jane and Rochester come across as cardboard-cutout versions of their “real” selves. Still, though as a booklover’s treat The Eyre Affair is not terribly deep or serious, it turned out to be a substantial enough concoction to satisfy me.

22 thoughts on “Brooding about the Brontes: The Eyre Affair”