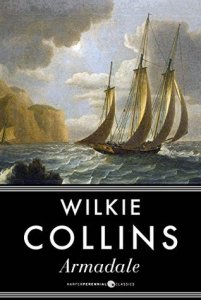 Having enjoyed Wilkie Collins’s two most famous novels, The Woman in White and The Moonstone, I wanted to read more of this Victorian author’s wildly popular sensation fiction. Recommendations from several quarters led me to Armadale, his longest book and the one of which TS Eliot said “It has no merit beyond melodrama, and it has every merit that melodrama can have.”

Melodrama it certainly does have, in abundance. The extremely convoluted plot involves concealed identities, stolen inheritances, murder, suicide, violent love, strange coincidences, and ingenious scams. There’s not much to delight a logical mind, but many memorably-drawn characters, moments of humor and satire, and some penetrating psychological insights. I’m not sure what Eliot would name as the merits of melodrama, but if he means that it’s only an exciting story without much depth or substance, I’d say there’s more to Armadale than that. Collins brings up questions of love, identity, and sacrifice that last beyond the momentary thrills of the page. He portrays all his characters, even the evil and absurd ones, with a generous spirit that brings out their common humanity and keeps us from thoughtlessly dismissing them.

Although I did enjoy the book, and didn’t find it difficult or intimidating in spite of its length, it seemed to me like a first draft that would have benefited from another round or two of revision. It was originally published in installments, and Collins appears to have written it on the fly without an overarching outline or sense of structure. The tone lurches from ominous thriller to drawing-room comedy, with interpolations of a lurid prophetic dream that ramp up the melodrama to the max. Partway through, villainess Lydia Gwilt enters the scene with a first-person narrative from her journal, in which she conveniently if somewhat unwisely records her dastardly deeds for posterity. Letters and other documents have already been inserted into the story, a device that breaks up the lengthy third-person stretches and lends a pleasant variety, but the journal starts to take up more and more space and other characters are pushed aside. It’s not that Gwilt isn’t a complex and compelling character — she definitely is — but this throws the balance of the novel out of whack. One wonders what would have happened if Collins had gone back and made the book Lydia’s story, or at least started giving her perspective at an earlier point.

Given the circumstances of nineteenth century publishing, though, that was not to be. If you choose to embark upon this magnificent melodrama, you’ll have to take it as it is, finding pleasure in its excesses and forgiving its faults.

23 thoughts on “The Merits of Melodrama: Armadale”